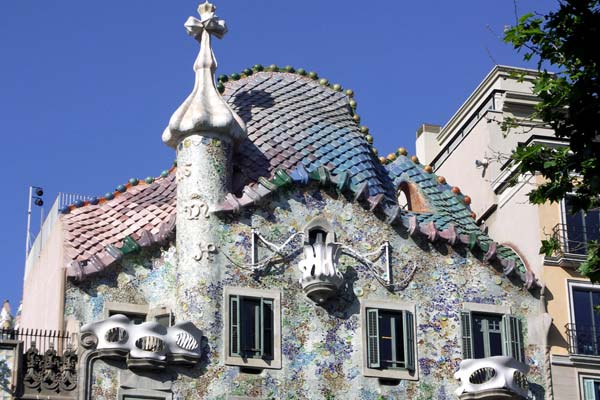 Was Gaudi a Genius or Mad Man

Last Thursday, 3rd February, we were enthralled by Peter Atkinson’s talk about the life and buildings of Antoni Gaudi, the non-conformist Catalan modernism architect. Gaudi was born in Reus, near Tarragona, in 1852 and when he graduated from the Barcelona School of Architecture in 1878 his Professor asked the question “Genius or Mad Man”, as he was unwilling to comply with the architectural standards of the time. His principle objections were to the adoption of ‘flying buttresses’, to provide structural support, and a reliance on gothic and circular arches, arguing that ‘parabolic arches’, the shape of a hanging chain necklace, gave an opportunity for more slender structures. He was also not keen on the standard form of design presentation, plans/elevations/sections, and preferred 3D drawing formats and constant changes as works progressed. 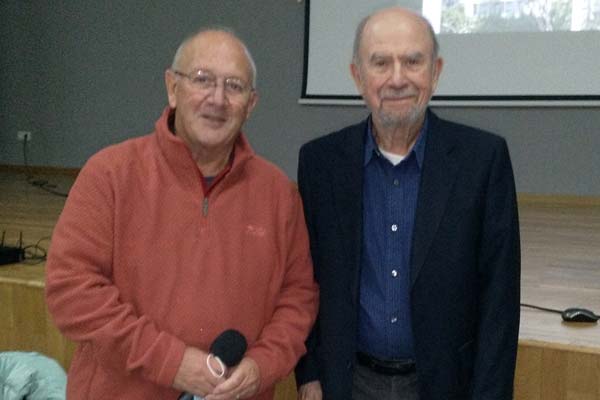 Gaudi was a very pious man, who attended mass every morning of his life and confession each evening but living an austere and celibate life one wonders what he had to confess – perhaps his arrogant and belligerent character. He was not good at complying with budgets and time schedules, nor in obeying architectural and planning regulations – when one of his designs was challenged by Barcelona City Council as being too high, he retorted that he would remove the top part down to their height restriction and leave it unfinished and ugly – the Council relented.

Despite his unconventional and opinionated approach he seemed to be very successful with many commissions, mostly in his beloved Catalonia, starting immediately upon his graduation, although almost invariably the construction went on for many years – as we all know his last project Sagrada Familia in Barcelona is still unfinished almost 100 years after his death. Along with his use of parabolic arches his buildings highlight an extensive use of decorative tile finishes, ornate ironworks, chimneys with fancy shaped cowls and of course unusual architectural shapes and finishes, such as the roof of Casa Batilo in the form of the scaly back of a dragon. He was innovative as well and in 1906 included an underground garage and separate servants entrances in the design of Casa Mila.

However not all of his projects were successful with Park Guell, for one of his repeat patrons, perhaps the most notable where only three of the thirteen properties in a gated complex where sold. The park has two gingerbread style houses at the entrance and an enormous, elevated plaza overlooking the city – well worth a visit.

In 1887 Gaudi took over his most famous building, Sagrada Familia, intended as an expiatory temple for the Spiritual Association of the Devotees to St Joseph and was given a free hand – perhaps a fatal thing to say to Gaudi. The Eastern, Nativity, façade is complete with Gaudi statutes, the Western, Passion, façade was completed in 1976 from his sketches but not with his statutes. The main tower, for the Cross, and Glory façade are still to be completed to go with the twelve towers for the apostles and the tower for the Virgin.

Gaudi died in 1926 when he was hit by a tram whilst walking to his daily confession and due to the ragged appearance of his clothes initially they thought he was a tramp and not one of the three famous Barcelona turn of the 20th century architects. Once again now his genius is recognised and his buildings are well worth a visit whenever you are in Barcelona. 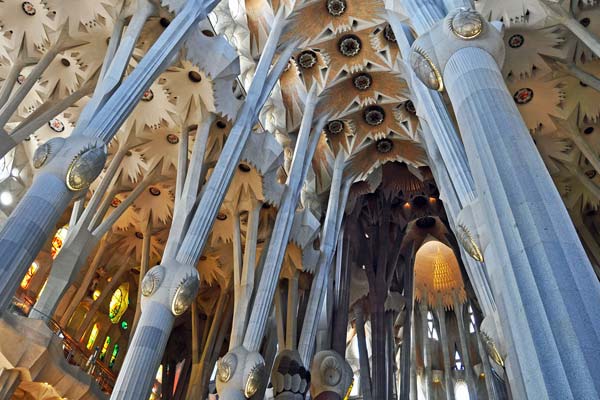