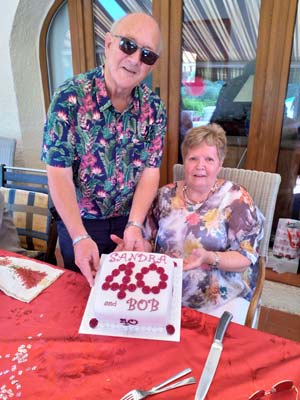 On 1st June 1982 a young couple gathered four friends and went to Kidderminster Registrar’s Office to commit themselves to one another – ‘till death do us part’. Now, 40 years on the couple find themselves comfortably retired and living in Spain, after a working life in the United Kingdom and Saudi Arabia. So, to celebrate their Ruby Wedding anniversary the husband offers to take his wife for lunch – ‘so generous after forty years’ she thinks! But then, the car by-passes the chosen restaurant and they turn into the drive of the home of their friends, Chris & Paula Barrett.

Before Sandra can say anything, she spies people she knows – ‘what are you doing here, or what am I doing here’ seems to pass through her mind before she is ushered into the garden where their friends and U3A colleagues are gathered to wish her, and Bob, ‘Happy Ruby Wedding Anniversary’. Certainly, another best kept secret – at least from Sandra. 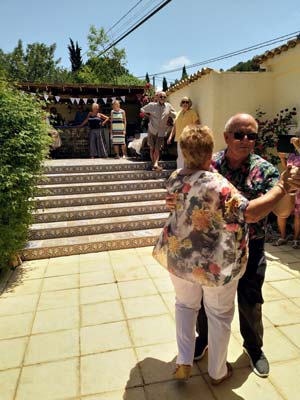 It was a beautiful sunny afternoon, with the garden of Chris & Paula’s home bedecked with decorations commemorating a Ruby Wedding, with friends all cheering loudly and waving to wish the happy couple a very happy day. There was barely time to greet everybody, or to get a cooling drink, before PaulJ, our compere for the afternoon, got them up on their feet for the Anniversary Waltz, with Bob taking the lead – as usual! There was not much interest in waltzing at that time and we all eagerly moved to gather our lunch from the super spread Paula, and many of the other wife’s had put together, with paella, salads, sausage rolls, cheeses etc etc we were spoilt for choice – but that was easily solved with ‘seconds’. Chris and and Paul Rowland were kept busy replenishing our glasses, with wine, beer and soft drinks. For a few minutes the talking stopped whilst we all enjoyed a super lunch, completed with the best array of desserts I have seen for a long time. 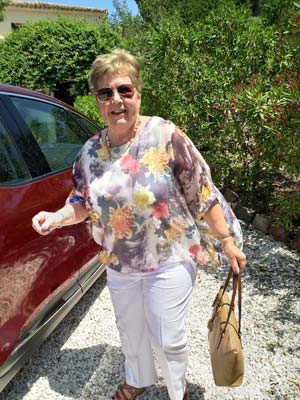 Whilst we were eating and relaxing Songbird (Jo) took over with the music serenading us with popular songs, many of which the Let’s Sing Together team seemed to have been practicing. So, without more ado the team was up singing their favourite songs to backing tracks provided by PaulJ. Then, another surprise for the Ruby Wedding couple – Bob was invited to sing ‘Oh Sandra’, to the tune of ‘Oh Carol’, before Sandra replied with ‘I Want to Be Bobby’s Girl’. 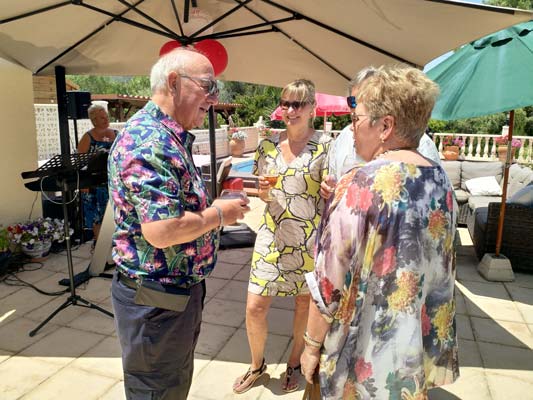 By now the effects of the wine and beer had kicked in and, with excellent choice of songs by Songbird and PaulJ, many of us were on our feet showing we still knew how to move with the music. Once again Bob was not outdone and clearly demonstrated good Line Dance moves.

With the party in full swing Mary presented her Ruby wedding cake to Bob and Sandra and it was time to toast the happy couple – finally they were convinced all that secrecy all those years before had been worthwhile. 40 years together and many many more to come.

All to soon we had to move on, as the next day it was somebody, nearly as important, start of the Platinum Jubilee celebrations.

Congratulations to you both. 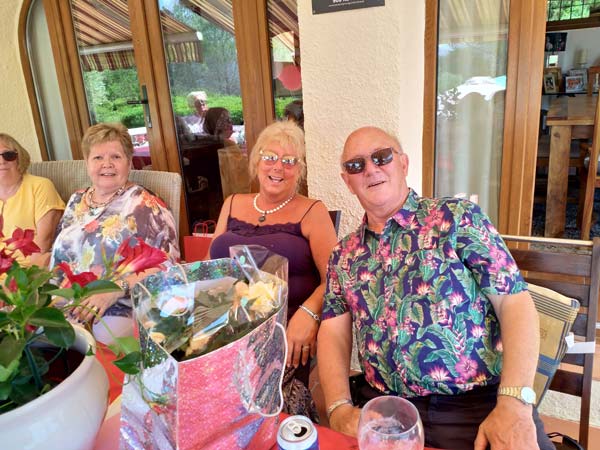 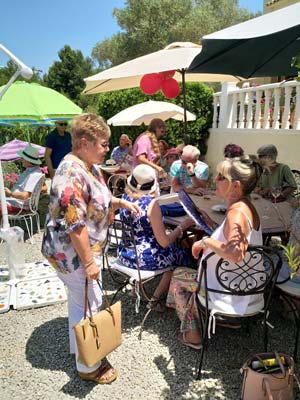 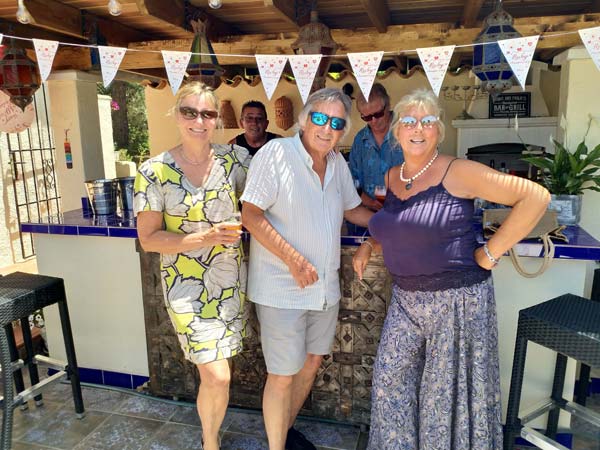 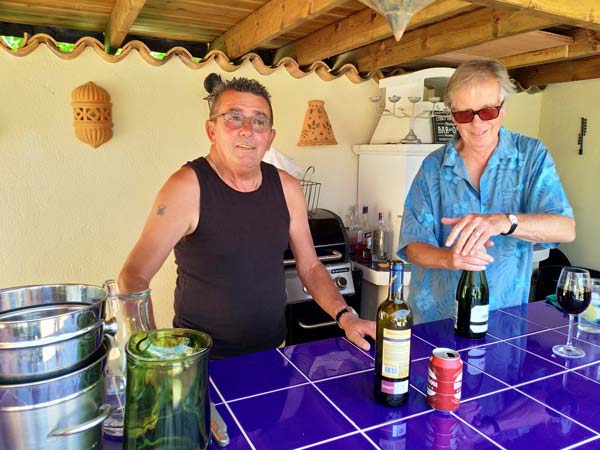 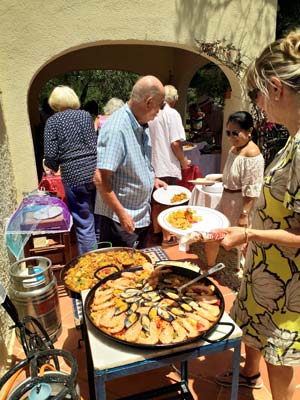 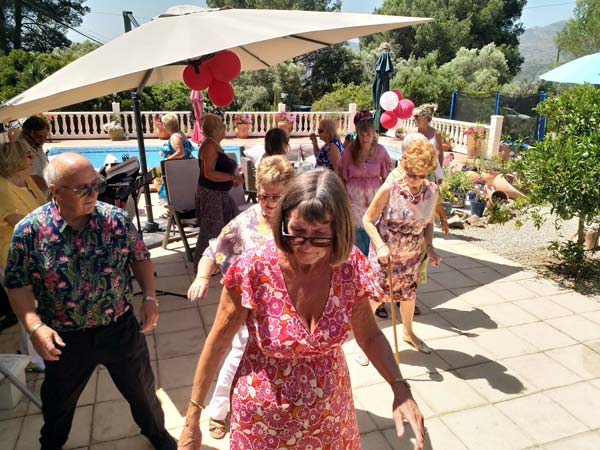 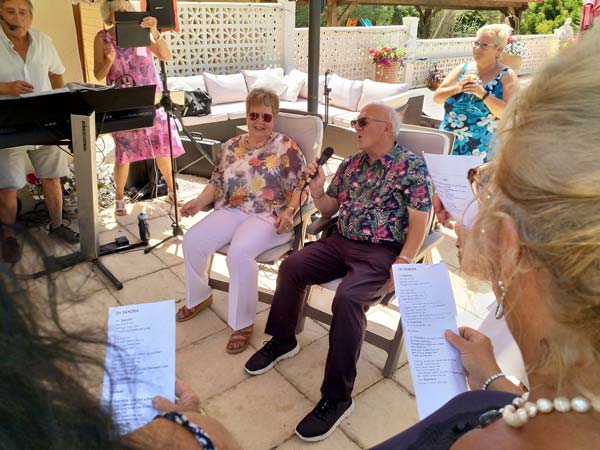 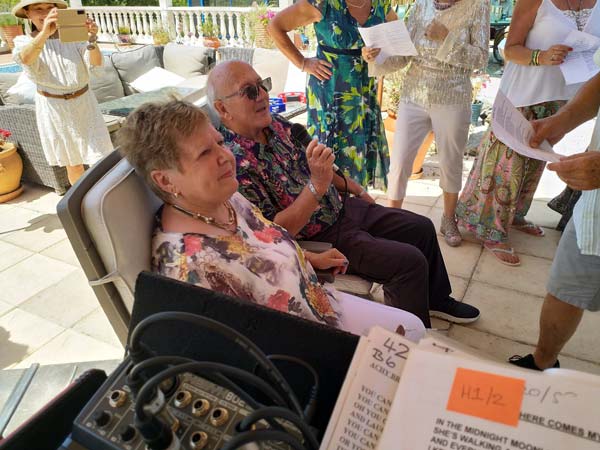