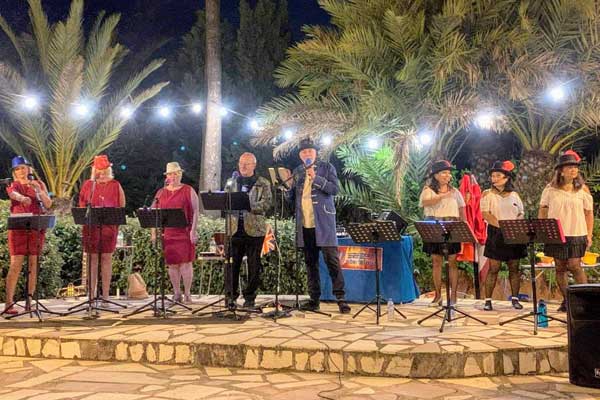 After the last-minute cancellation of their August gig at Los Arcos, due to Covid restrictions, The Entertainers finally managed to perform to a socially distanced audience of some 130 people in the garden of Los Arcos on Wednesday 30th September.

What a treat we were provided, with three sets of excellently mixed songs, from the Show to Pop and Rock & Roll and ballads and three costume changes. The Entertainers had obviously worked hard in practice since lockdown restrictions were lifted and they were word and note-perfect as they performed the songs, with the Dolly Birds dance movements making everybody wanting to get up and dance. David Rohl, their Musical Director, had put together wonderful backing tracks, some orchestral to the excellently balanced songs. We moved from a wonderful presentation of Bonnie Tyler’s, ‘A Total Eclipse of the Heart’, to Bette Midler’s, ‘The Wind Beneath My Wings’, and four wonderful songs from The Greatest Showman and with ‘The Music of the Night’ giving a glimpse of The Entertainers versatility and excellently balanced music and choreography. 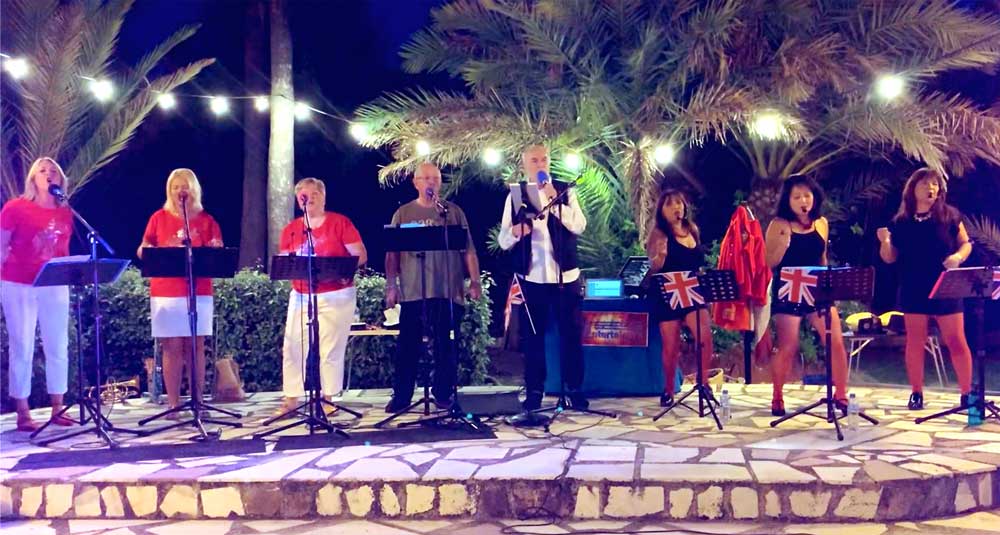 The Entertainers were performing to raise money for Jalon Valley Help, with all the ticket money going to the charity thanks to Los Arcos providing the venue free of charge, and the fine total of euro 2,200 was raised on the night. The Entertainers have also made a CD, entitled ‘Let The Music Play’, which is on sale at euro 10 at all JVH shops and events, again with all the money going to JVH thanks to Belvins Franks paying the pressing costs.

An excellent evenings entertainment was completed with The Entertainers singing the JVH theme song, ‘You Raise Me Up’, accompanied by the JVH team leading the audience participation.

The Entertainers next, not to be missed performance, with by at the U3A Christmas Dinner on 27th November, and JVH hope to be able to stage an Entertainers Concert at Sala de Canor, in Teulada in the Spring – date to be announced soon.

A wonderful wonderful evening of quality music and dance routines was very capably supported by Pete, their Lighting Engineer, and operator of the smoke machine. Be sure you don’t miss the next performance – watch this newspaper for the announcement.

WITH THE CURRENT COVID-19 RESTRICTIONS THE FOLLOWING IS THE LATEST INFORMATION ON U3A GROUP ACTIVITY FOR 2021. CHECK THE WEBSITE FOR CHANGES OVER FORTHCOMING MONTHS.

OPERATING VIA ZOOM OR WHATSAPP

ALL OTHER GROUPS ARE CURRENTLY SUSPENDED ALTHOUGH INDIVIDUAL GROUP LEADERS ARE KEEPING IN TOUCH WITH THEIR MEMBERS WHENEVER POSSIBLE.