On Wednesday 26th September the U3A Vall del Pop Wine Tasting group had their first tasting of the season at the Black Apple Bistro in Jalon, which intriguingly shares the premises with the florist “Heidi’s Flowers”. As the weather was showery our tables were set amongst the beautiful flowers.  31 members attended. A lively night at a new venue for us.

That evening Sommelier Jorge, from Orba, presented the wines in a friendly and informative way assisted by Rachel and Natalia, from Black Apple, who translated where necessary and served the wine.  The group were offered six wines: 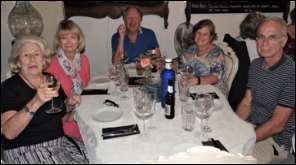