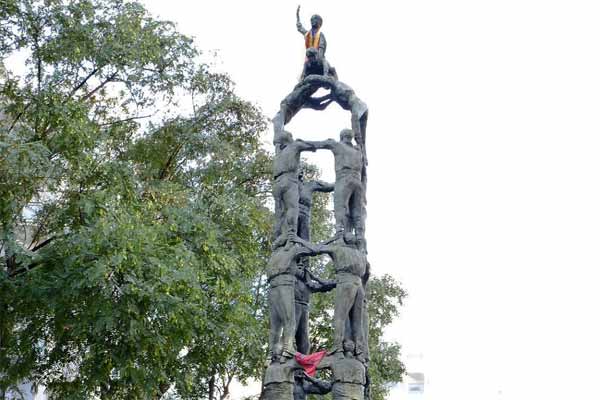 On the 23rd December 2019, 50 members of the Vall del Pop U3A left Jalon to travel to Peniscola on this year’s Christmas trip.

The weather was gorgeous with a good forecast ahead. Our first stop was the Neuva Shopping Mall in Valencia, fabulous, ladies take note this is our 2020 Christmas shopping destination! Following lunch here we continued to our destination in Benicarlo, the beachfront 4 star hotel La Plaza. Time to relax and unpack before dinner.

Following breakfast on Christmas Eve we spent the day in Tarragona, a partly walled city with many historical buildings, interesting shops and of course along the Rambla, the iconic statue of the “human tower” which Tarragona is famous for. (See the photo) We took the land train tour and in the old part of the city the ride became “a bit hairy” with the driver taking the narrow streets and bends at speed, obviously doing this on a daily basis. It was back to the hotel for our first Gala meal, extremely good followed by live music and dancing until late.

On Christmas morning a lot of us strolled along the VERY long and beautifully kept beach, the weather again blue skies and sunshine, apparently 3 degrees warmer than Jalon!! Before our Gala Christmas lunch, we all met near the pool area for carol singing and Secret Santa presents. For the singing we appeared to have acquired another 30 people who joined in, which of course they were most welcome, including Pepe our driver and a couple of his colleagues from Gandia Travel, who sang with gusto when it came to Feliz Navidad. Secret Santa was a huge success, with a great range of presents all provided by Sandra and Laura’s endless shopping trips, both here in Spain and England. After the superb Gala lunch all we wanted to do was have a siesta, we don’t believe many of us made it into dinner that night, not surprising really.

Boxing Day saw us heading for Morella, Pepe our driver had to be very careful as the roads wound up and down the mountains with some pretty tight bends. The highlights of Morella are, the castle and medieval walls, erected in the 14th century. We had been warned to wrap up warmly and we certainly needed to. Morella sits almost a 1,000 meters high, it was very cold and windy but again the sun shone and we explored this quaint and historical town with its narrow streets, tall houses and quite a lot of museums. Some of our party were very impressed with the beautiful church there. Returning to the hotel, later on in the afternoon we joined Laura and Trevor in their “Family Fortune” game, which at times became a rather riotous affair but good fun.

On our last morning we were taken to Peniscola town with its majestic castle (apparently it appeared in the film El Cid) and long sweeping beaches. It really deserved a longer visit but of course we all had to get back for our last lunch before making our way back to the Jalon valley and home. We had a short quiz on the way back in the coach which was enjoyed by most members, with 3 winners. We all agreed we’d had a great time thanks to Sandra and Bob Welham, Laura Terry and her partner Trevor, and of course Pepe and Gandia Tours. It does take a lot of time, effort and planning to make our U3A trips successful.