All group activities are cancelled until FURTHER NOTICE. 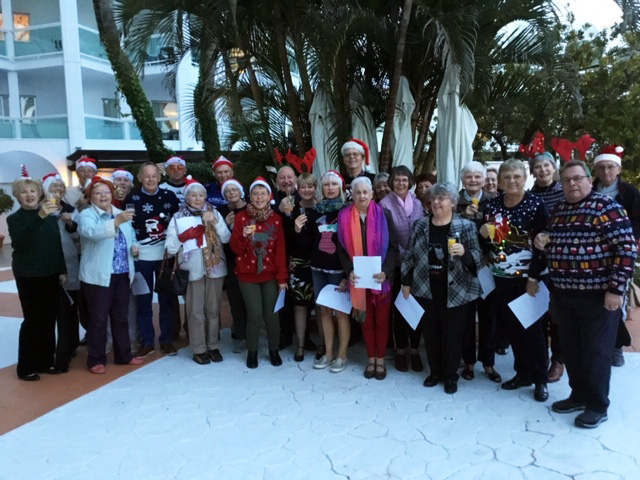 Christmas in Andalucia with the U3A Vall del Pop

There was excitement in the air as, just after sunrise on a beautiful December morning, forty three members of the U3A Vall del Pop assembled in Jalon to start our special Christmas break in Nerja, Southern Spain.

Guided jointly by the  U3A’s Travel, Culture and Entertainment Team Leader Sandra Welham and her husband, U3A President Bob Welham,  we set off right on time and arrived without incident at the Aparthotel Marinas de Nerja, the venue for our next four nights. Situated on the sea shore but just a short walk from Nerja town, the hotel proved an instant hit, with every guest enjoying suite facilities. Not surprisingly, as the trip was booked on a “fully inclusive” basis, the bar and restaurant soon became popular meeting places.

Sandra and Bob had arranged a series of trips and outings for us using the Gandia Tours bus which was ably and safely conducted by driver Pepe, whose continuous good humour added much to the enjoyment of all.  Outings were organised to Nerja old town  and the impressive Cueva de Nerja on Christmas Eve morning and, in the afternoon, to the pretty white village of Frigiliana where many of the group took advantage of the tourist train to view the more inaccessible parts. Before dinner, we gathered in the dusk to sing a range of Christmas Carols in several languages, an event which was enjoyed as much by the other guests of the hotel as by the singers!

On Christmas Day, we met for cava and gifts from Secret Santa ( AKA Bob and Sandra!)  before settling down to a more formal Christmas lunch in the hotel’s banqueting suite. With four courses to get through each accompanied by unlimited wine and soft drinks, most of us did not complete our feast until very late in the afternoon!

After the celebrations of the day before, Boxing Day got off to a more relaxed start but after lunch, Pepe drove us into the nearby city of Malaga for a bit of retail therapy!

There was also the sea front and Cathedral to visit before 18.30 when we were able to witness the famous Christmas light and music show, a spectacular fifteen minute display in a specially constructed tunnel which ran the full length of Calle Larios. The Town Hall budget for this year for the event was more than 700,000 euros and it has drawn crowds from all over Spain and Europe.

Sadly, all good things must come to an end and so the next day, we set off for the journey back to the Costa Blanca. But spirits were high and somewhere near Murcia, Bob produced a quiz for our entertainment, which was won by Tony and Brenda Bailey.

We all agreed that the 2018 Christmas Trip had been a great success and formal thanks were made to Bob and Sandra for their hard work, and to Pepe for driving us safely and smoothly throughout. I hear that next year’s venue might be to Peniscola and, based on the success of this trip, it will undoubtedly be a sell out!  Time to get our names down on the list, I think!