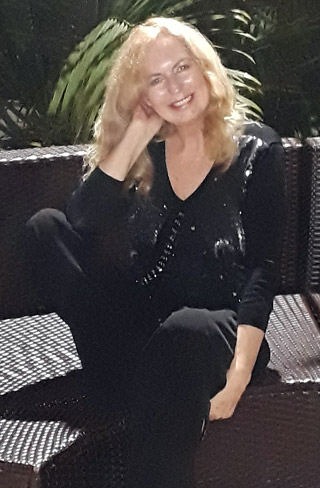 Now, with a name and looks like this you'd expect a Scandinavian or Eastern European accent wouldn't you? You'd be wrong. Despite living in Spain since she was five years old...it was broad Glaswegian! Jana gave our U3A a most entertaining insight into her very varied and well-travelled life.

She explained she had always had a great yearning to travel, so in 1976 she joined the Royal Navy, working in Plymouth, Portsmouth and Chatham This didn't quite provide the stimulus she wanted, so she transferred to the Regulating School - one of only two women on her course. The other lady left almost immediately. This course offered an introduction into security and policing within the Navy, and she found herself doing combat training against the guys in her group.
This led to an offer for something very different - a certain Saudi Princess, for close protection work. Jana said she ended up marrying the man connected with this offer, and her post-divorce comments about him were less than flattering. The Saudi Princess seemed to spend most of her time away from her homeland. Jana found herself in New York watching her 'Principal' eating, shopping, eating, shopping - and more shopping....on a DAILY allowance of £10,000. Well that doesn't go far on 5th Avenue! Jana was not willing to disclose many details of this work - on the basis that she wants to keep her head firmly on her shoulders!
Following this, she worked in protection with Prince Andrew...who once made her a cheese sandwich. How the other half live!!!
BUT - there still wasn't enough travelling to satisfy her soul, so she joined British Airways Long Haul in 1995. Coming out of Nigeria in 2001, the aircraft hit clear very bad clear air turbulence, and she found herself flung up to the cabin ceiling, severely damaging her neck. (Which is why, ladies and gentlemen, the announcements strongly suggest you keep your seat belts loosely fastened while you are sitting down!) She was grounded permanently, but her therapy provided the opportunity to regain the use of the nerves and muscles in her arms and hands which were a result of her neck damage.
She typed...and typed...and wrote Guardian of Secrets. Her new path was firmly set. Jana has won multiple awards for her work - one award was given out in the USA just the day before she spoke to us. She is working on screenplays from her books, and waiting for the right offer to make the film up to her exacting standards. All in all, a very chequered career, which is now providing her with a good income and plenty of travel!
All her books are available on Amazon and Kindle...and Jana was happy to sign books bought by several members at her talk.