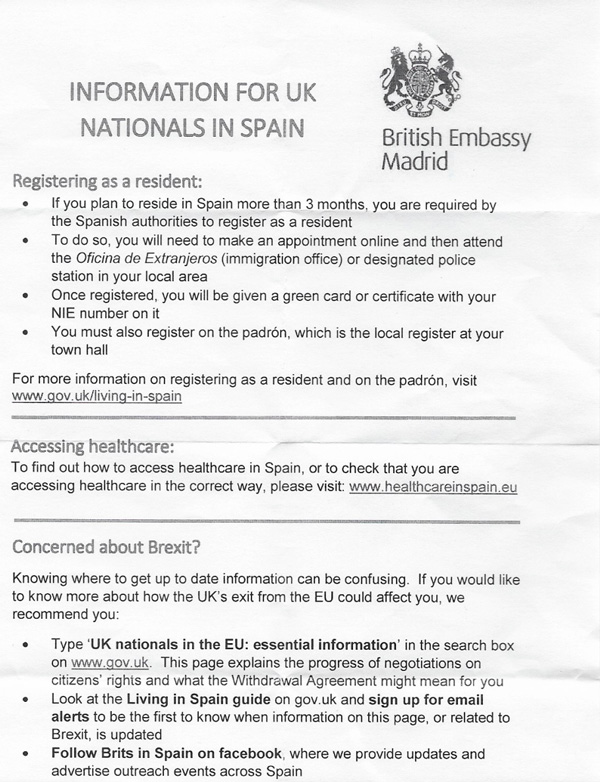 Brexit and your Need To Know

With less than 50 days to go before Brexit it is important to bring to your attention the advice given below in the ‘Handout’ provided by the British Consulate at an open meeting held in Alcalali just prior to Christmas.

Subsequently a number of reports have been published which again highlight the importance of British Nationals being properly registered if you reside in in Spain for a period in excess of three months. Of particular importance they relate to the provision of Health Care and such things as Passports, and Driving licences but there are many others all of which can be accessed via the Government web site www.gov.uk and are detailed in the previously mentioned ´Handout´.
Given the confusion that currently exists and the potential for a ´No deal Brexit´ it is important to read the following reports.

This report provides the overall position as at 29 January 2019.

Healthcare in Spain, including the Balearic Islands and Canary Islands.

Published on 29 January 2019 contains detailed information regarding access to healthcare via EHIC (European Health Insurance Card) which is valid until 29th March 2019 following which it is advised that people secure private insurance to cover healthcare should it become necessary.

This report also details the entitlement to healthcare for UK Nationals who are properly registered as resident and have lived in Spain for more than five years continuously and may be able to apply for permanent residency. This will allow access to state-funded healthcare under the same conditions as Spanish citizens, for those who have lived in Spain for less than five years but have been registered with the local town hall for one year this report also provides information regarding the ´Convenio Especial´ which is a pay-in health insurance scheme offered by the Spanish government that allows people not employed to ¨buy into¨ the Spanish System. (This currently requires a payment 60€ a month for those under 65yrs, and 157€ a month for those over).

Prepare to drive in the EU after Brexit

Updated on 10 February 2019 and contains a paragraph in which it states that ¨If you are a UK licence holder living in the EU or EEA you should exchange your licence for a local EU driving licence before the 29th March 2019. From that date you may have to pass a driving test in the EU country you live in to be able to carry on driving there. You should consider exchanging your UK driving licence for Spanish one.

You can drive on your EU licence when visiting the UK.

If you return to live in the UK, provided you passed your driving licence in the UK or another specified country, you can exchange your EU licence as soon as possible. Increased demand may lead to longer processing times and delays to exchanging driving licences the closer it is to 29th March 2019.licence for a UK licence without taking another test.

Passport rules for travel to Europe after Brexit

If you renewed a passport before it expired, up to nine extra months may have been added to your passports expiry date. Any extra months on your passport over ten years may not count towards the six months that should be remaining for travel to most countries.¨

As a final comment it is extremely important to keep a close eye on the websites recommended by the British Consulate where it possible for you to sign up for early ´alerts´ regarding any changes to policy. With less than 50 days to the 29 March it makes far more sense to keep abreast of things from official sources particularly if we end up with a ´no deal´ Brexit.