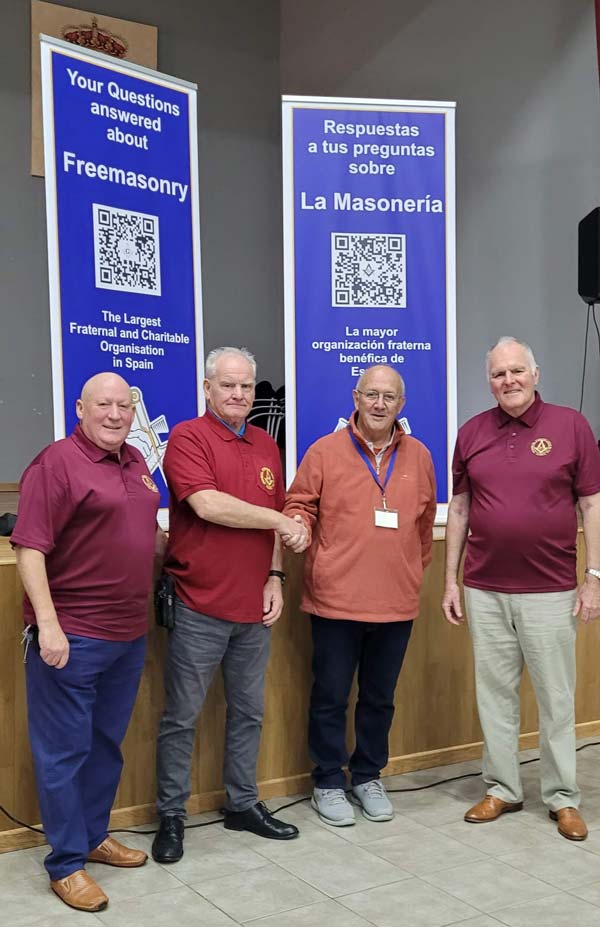 At the Vall del Pop U3A’s General Assembly on 12th January our members were given an insight to Freemasonry by Frank H Wallace, supported by Robin TillBrook and Malcolm March, who are all members of the Grand Lodge of Spain.

We have probably all heard of the Freemasons. However, most if us know very little about its objectives and entry requirements. It is often perceived to be a male only society shrouded by secrecy, largely as you have to be invited to be a member, its members are sworn not to divulge its rituals and symbolism and because it does most of its charitable work anonymously. This is an aspect they want to dispel, although it is acknowledged that Freemasons have a special handshake, as a means of recognition and friendship within the brotherhood, and there is some symbolic dressing up as part of their Lodge ceremonies. However, the teachings of Freemasonry enjoy morality, charity, and obedience to the law of the land. It is not, however, a religious institution, though it is often taken to be such.

Freemasonry began in its present form in the 18th century but has existed for at least one thousand years or more and is now worldwide and the largest fraternal society. Its aims are to play a part in encouraging good and thoughtful conduct, a love of family and friends and a desire to help others, but not necessarily to seek recognition for such help. It encourages a recognition of one’s responsibility for justice, truth, honesty and integrity and to act with honour at all times.

Freemasonry offers men a chance to be part of an international non-profit making organisation, with members from all walks of life who share a concern for human values, a desire to help others and to give rather than to receive. They organise events, such as golf tournaments to raise money which they use to support needy charities in their local area, including a cooling system for a special needs school and assessment support to autistic children.

There are three Masonic Lodges in Javea but only one ladies Lodge in the whole of Spain. But, as Frank pointed out, in much of their charitable activities they are happily fully supported by their wives and family members.

At next month’s GA the speaker will be Angela Chantry who will talk about The Italian Chapel.