the GENERAL ASSEMBLY on April 2nd has also been CANCELLED.

Future General Assemblies for May and June will be advised in due course.

All group activities are cancelled until the end of March, when the situation will then be reviewed. 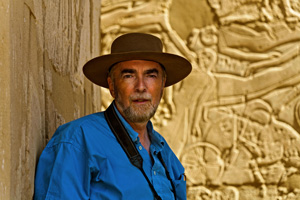 Egyptology Group Survives the Collapse of the New Kingdom

David led us through the last in the series of his excellent talks and he will be going ‘back to basics’ in the autumn. The collapse of the New Kingdom was caused by a whole series of events — famine, climate change and earthquakes which brought about the demise of other civilisations, Mycenaean Greece, the Hittite empire and the Babylonians. The Trojan War didn’t help, and Egypt was ‘invaded’ by a large number of people from across land and sea, which were known as the Sea Peoples. As they brought their wives and children with them, it was more a migration from their own lands than an actual invasion. This was followed by civil unrest in Thebes, with the tomb workers going on strike - the first ever recorded in history!

Then there was a coup d'état. Ramesses III was murdered in a plot fomented by 38 conspirators, His throat was cut...and his mummy wears a scarf, as you can see here. This resulted in three kings ruling the land instead of one all-powerful Pharaoh.

And so the final collapse began. Now, having completed 30 talks, David’s audience quite hoped they might be given their Graduation certificates. No such luck, we haven’t done the proper paperwork!

David explains his plans for the autumn: -
Now, I am letting you know that, after preparing thirty lectures for the Vall del Pop Egyptology Group, I feel it is time to start the sequence over again, since there are lots of new group members that have joined over the last couple of years who have never seen the early lectures. It is also fairly obvious to me that coming into the lecture series towards the end of the sequence has been difficult for newcomers and it therefore would be a good idea to go through the basics and easier material for those who are finding the latest topics rather complicated. And, besides, even Egyptology group veterans could probably do with a refresher course!

The U3A Egyptology group is dedicated to the study of Pharaonic Egypt from the Pre-dynastic Age to the absorption of the Nile valley into the Roman Empire in 30 BC.

Over the course of the project, we will be covering many different aspects of Egyptian civilisation, some of which you won’t be able to read about in popular books on the subject. But, don’t let that put you off!
The presentations will be easy to follow and full of great pictures …

so you can just relax and let the magic of Egypt and the rest of the Ancient World wash over you like the gentle waters of the River Nile.

For further information about joining this group, please see the Ancient Egypt page