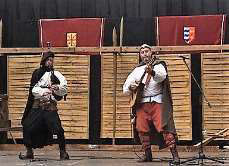 Nearly 50 U3A members thoroughly enjoyed their trip to the All Saints Fair (Feria de Todos los Santos) in Cocentaina; a fair that has been running every year since 1346. Arriving at 11:00 am and leaving at 4:30 pm meant we were walking around for five and half hours, but there was plenty to see and do to fill that time.

Essentially an agricultural trade fair, there was an area filled with tractors, lorries and farming equipment but in the town squares and in the myriad of narrow streets there were hundreds of stallholders and entertainers providing a medieval market,  an Arab souk, traditional music and dancing shows. In one of the squares, primarily aimed at the children, there were donkeys, Shetland ponies and similar small cuddly animals for them to see. 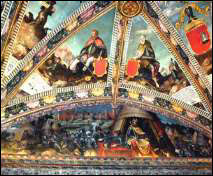 In the courtyard of the Earls Palace a range of medieval games were on show, all in working order, and you were allowed to give them a try too! The palace itself, was well worth a visit. Now a museum holding various works of art, it was originally built  in the 13th and 14th centuries and later updated in the 16th and 17th centuries to the Renaissance palace you see today.  Be sure to look up at the ceilings as well as the floors you are walking on!

Another square was the traditional foods and eating area where local restaurateurs cooked meats over wood fires, including spit-roasted piglets, along with the many different varieties of sausage. There were many other foods on offer as well, Including breads, cold meats, cheeses, salted fish and hand-rolled chocolate. In the Arab areas there were stalls selling baklava, a sweet Turkish pastry, and there were two or three other stalls selling a wide range of fresh spices and teas. And we mustn't forget the abundance of stalls selling leather goods, jewellery and gifts.

This was a wonderful and very interesting festival, one of the most famous in our Communidad Valenciana, drawing people from far and wide. If you have an interest in culture and history, and want a fun day out at a very enchanting fair, don't miss this  trip next year! (but definitely avoid it if you are a piglet!)... Lorraine